We have come up with a whole bunch of fun Halloween Hairdos for you.  Many of them are done by recycling little Halloween decorations or favors. 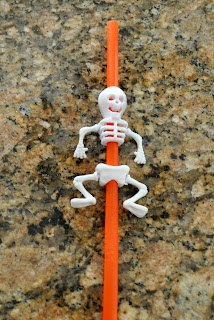 You can find these cute little straws all over the place.  I've seen them at craft stores, Walmart, and the dollar stores.  They usually come in a pack of 4.  Grandma gave these to the kids and I immediately wanted to use them as a hair accessory.  (My mind is twisted like that.)  :) 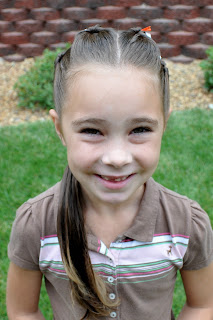 Start by parting the hair from ear to ear and then dividing that top portion into 4 equal areas. 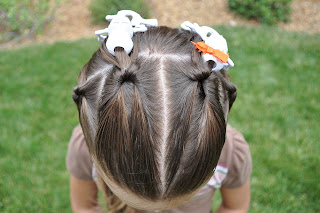 Secure each area with an elastic and then create a Pull-Through. 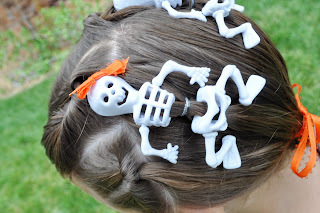 Now grab two skeletons and take them off the straw.  (I also glued a bow to one of them so we could have a boy and a girl.) 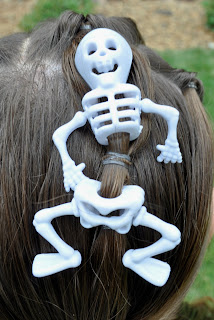 Start with one of your middle sections and grab the little ponytail.  Divide it in half and feed half of the hair through the top portion of the skeleton using a Topsy Tail.  When the skeleton is placed where you want it, grab the other half of the ponytail and tie an elastic around both halves to hold it in place. 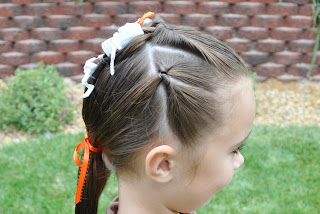 Now divide the ponytail in half once more and feed half through the bottom portion of the skeleton.  Get it into place and secure it by tying an elastic around both halves of the ponytail again. 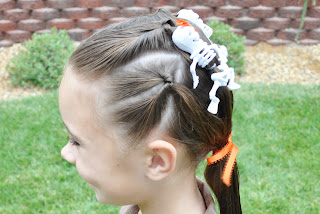 Follow these same steps for the second middle section of hair until both of your skeletons are securely attached.  Pull the two side sections and all the rest of the hair back into a low ponytail and finish it off with a ribbon. 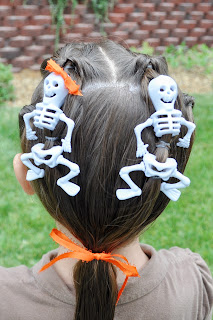 As your princess walks around the skeletons will move ever so slightly and it looks as though they're dancing.  :)
Posted by Julie at 7:43 AM

That is so AWESOME! You're so smart.

I LOVE THIS!!! That's it, I'm making a trip to the dollar store tomorrow!

We love this idea! It is now featured http://www.mytrendytykes.com/2010/10/theres-skinny-skeleton-in-your-hair.html

Linda, thanks for the feature - the fun has just begun with the Halloween Hairdos. :)

I found you through Tip Junkie, and I'm so glad I did! As a Mommy to 5 little girls, I get a little brain dead for new styles sometimes - now I can just check out your site. Awesome!