My princess came up with the idea for this one and wanted to give it a try.  This hairstyle is easiest with wet hair. 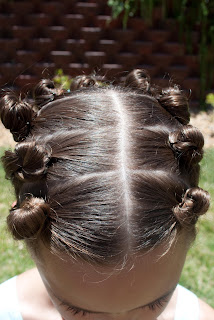 Start by making a straight part on the top of the head that goes all the way back to the crown.  The part can either be directly in the center of the head or a little off-centered like we've done here. 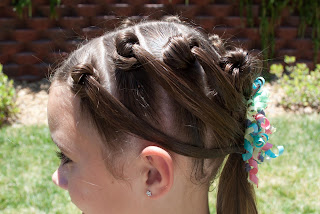 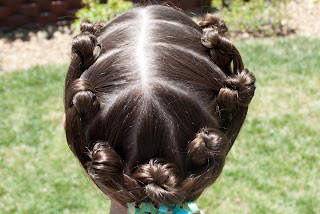 Start with the back-center ponytail and wrap it around itself then pull it through the middle, creating a knot over the elastic. 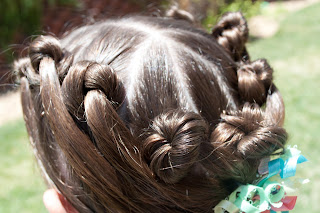 Now move to the adjacent two ponytails and create knots out of them as well.  (I had my princess hold the ends of my knotted ponytails until I secured them so they would not fall out.) 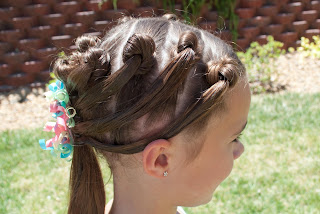 Pull the remaining hair from those two knots to the back knot and secure them in with that ponytail - just below the knot - with a tight elastic.  Move up to the next two adjacent ponytails and do the same thing. 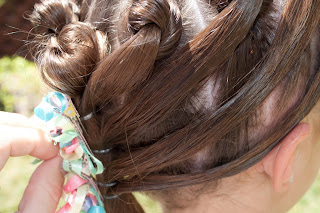 Finish knotting the rest of the ponytails and adding the remaining hair into the back ponytail as shown here. Add some hair clips over the ponytail to hide all of the elastics. 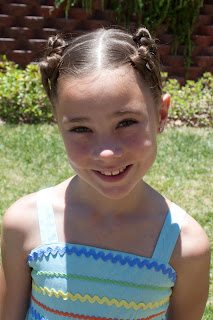 It turned out pretty cute and she was so proud of her creativity!
Posted by Julie at 1:38 PM