This one was so fun for me to do and it turned out really cute.  (Even thought I wish I would've had a bit more orange ribbon for the pumpkin buns.) 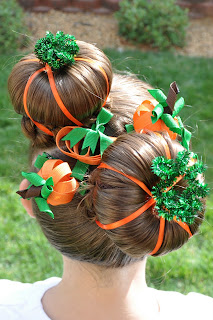 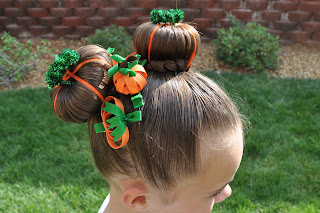 Now take the remaining hair on each bun and twist it together in a Corkscrew.  Wrap the Corkscrew around the bun and secure the ends in with bobby pins. 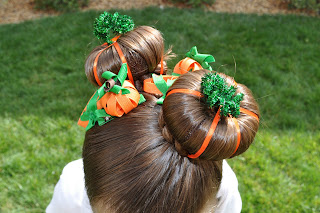 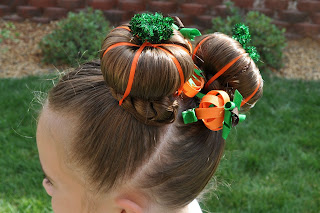 Now grab a green pipe cleaner for each bun and make the step and vines by twisting it around a pen.  Stick the end down into the bun mold and it will hold just fine.  We've also added some other fun little pumpkin clips to the hairstyle to make it look more like a "Pumpkin Patch".
Posted by Julie at 12:55 AM

Looks great! I did mine a little different... I think your way was easier. Mine was a pain to get unwrapped at the end of the day. I also love your vines. I used the additional hair (instead of a tucking in around the bun) to make a stem at the top that I wrapped in green ribbon and tied with a bow.

Thanks for posting all these great hair style ideas! Quick question - what's a bun mold? what are some other things I can use, as I am located in Hong Kong.