Thanks for being patient with us while we took a couple weeks off.  We have had family in town and lots of school and extracurricular activities going on.  We are excited to get back to posting some hairstyles and our first one is called "Long Knot Puffy Braids". 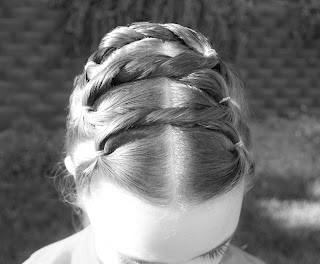 Start with wet hair and divide it in half  by creating a part directly down the middle of the head.  Now make a small section at the front of the head on each side of the part.  Combine each of those sections into a small elastic so that you now have two small ponytails - one on each side of the part.  Take those two ponytails and do the first step of tying your shoelace - take one over the other and pull it through so that the ponytails have created a twist and are now on the opposite sides from which they started. 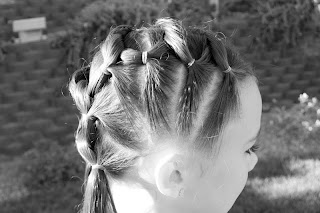 Have your princess hold those two strands while you sections out two new areas.  (Right below your previous two.  Add the ponytail on the right side in with that new section on the right and secure it with an elastic.  Do the same on the left side as well. 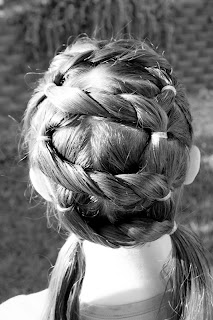 Now take your two new ponytails and just repeat the steps.
Continue creating new sections of hair down to the bottom of the head.  You will finish with two final ponytails.
Posted by Julie at 11:05 AM

I love how simple this is but it looks so fun and different! Thank you for all the work you put in with doing the hair, taking pictures and posting it all for us to share in!

At MyAssignmenthelp, we only hire essay typer who has proficiency in the English language which is why our essay writing help services are known to be free of any grammatical errors and further beautified with excellent use of vocabulary, linguistic and stylistic tools. We present the struggling youth with top-notch academic content, while strictly abiding by the course requirements given to us. We try to deliver your essay to you before the deadline you have set for us so that there is spare time for you to assess our work if you need a revision.
Nursing Assignment help
Homework help
Case Study help
Urgent Assignment help
Essay help online

My Assignment Help offered by assignment studio is considered to be one of the best assignment help service offered online by a team of professional and experienced academic writers.

Get all of the world news of celebrities and stars. Also, Check Ethnicity Wiki Category.

Thanks again for sharing helpful information with us.

Have a great week ahead.