After our post on Wednesday we had a lot of feedback and everyone said the same thing, "We need a video!"  :)  (You can find that original post here.) We decided to create a bit of a new hairstyle out of the same thing so we created two wraps to switch it up a little but the concept is the exact same.
I tried to avoid the spotlight because it causes so many shadows but it still seems dark.  I'm working to fix this problem in the future!  Hopefully you can still get the general idea. 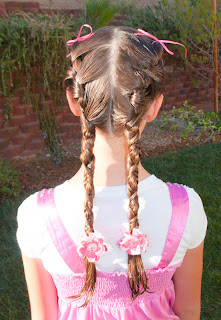 Here is what the finished Double Fancy French Wrap looks like. 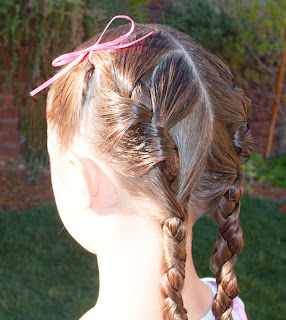 Here's a view of the "French" part where the hair has been added in. 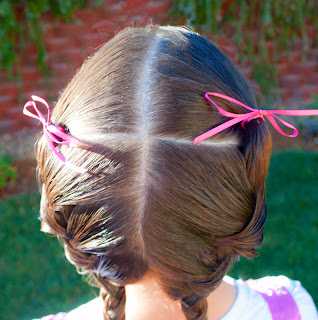 This is what the top of the style looks like. 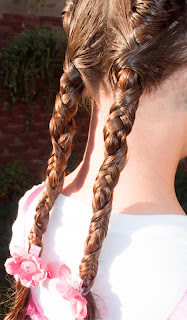 Here's a closer view of the wraps and they look nice but I have to say that I prefer the look of the wraps when the style is done in single form as opposed to double.  A thicker ponytail looks a bit better.  This is still nice though.  :)

Very cool, love that effect! I discovered your website via pinterest and have had a great time trying out your various styles. My four year old gets so much attention from her new fancy hairdos that she doesn't mind how long it takes to do them! My kid and I both thank you and I look forward to seeing more.

I have a question for you: she is going to be a ladybug for Halloween and I was wondering if you had any ideas for a special "bug do" I could style for her. She has a headband with antennae on it but I was thinking it would be nice to do something different. Thanks for your time and thank you again for sharing your inspiration!

ooh,that's a tricky one. It I think the "Flower Bun" (there's a video on here for it) would be pretty in the back because it looks like a flower and then have the antennae on top. Also a side Rosette would look really pretty! (This video is called "Rosette Headband" just leave out the headband part.) Good luck!

Great video! My favorite part is the kids knocking on the door in the background - that would SO happen at my house! Love it! :-) We're going to try this hairstyle in my daughter's hair today. Thanks!

Wow it is sooooo cute!

Our online term paper are reputable and known for offering high quality custom term papers and may students buy cheap term papers from us. We normally write academic papers in all disciplines of study.

Get all of the world news of celebrities and stars. Also, Check Ethnicity Wiki Category.

Thanks again for sharing helpful information with us.

Have a great week ahead.