Here is a different idea on an old favorite.  We love doing weaving of any type in the hair so we decided to  give it a try with braids.  This one does take a bit of time so make sure you have plenty set aside.  Start by creating an off-centered part in the bang line. 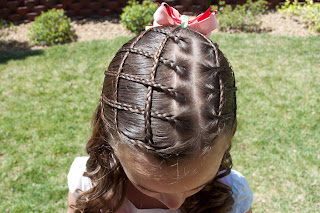 Create two more parallel parts on both sides of the part so that you now have two long sections.  Divide each of those sections into 5 equal pieces of hair and create a 3-Strand Braid out of each piece.  You should now have 10 small 3-Strand Braids.  Now go ahead and section out a -inch hick section of hair from the part right down to the ear on each side.  (Create this part parallel to the bang line.)  Those two new sections of hair can be divided.   Make 4 equal sections on the large side of the part and 3 equal sections on the smaller side.  Braid each of those sections into 3-Strand Braids.  You should now have 7 new 3-Strand Braids along the bang line.  Take the very front braid from the smaller part and include it in with the 3 braids on the bang-line of the smaller side of hair so that you now have 4 braids along each side of bang-line. 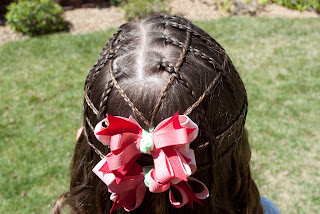 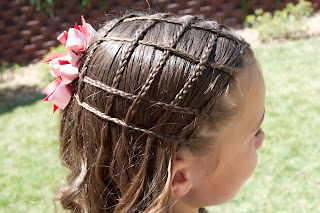 Start with one side of the part and grab the braid nearest to the front of the head.  Pull the braid through a Topsy-Tail and feed it with an in-and-out motion straight down through the braids that you pulled back.  When you reach the last braid you will actually feed your Topsy-Tail through the plates of the braid to hold it in place.  Unplate any remaining braid from the one you just used to weave.  Move to the next braid on that same side and weave that one as well, just be sure to alternate your in-and-out pattern. 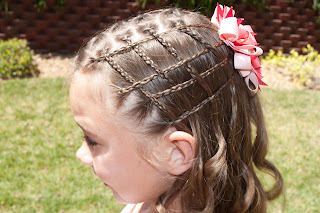 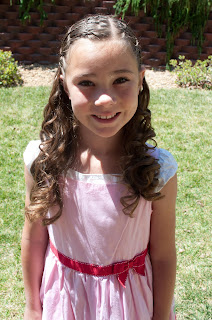 REMEMBER to pull the braid right through the plating on the bottom braid to hold it in place. 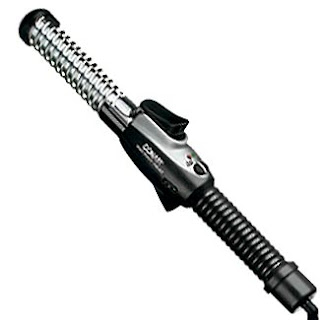 We finished off her hair by using the Conair Spiral Curling Iron and adding some curls. 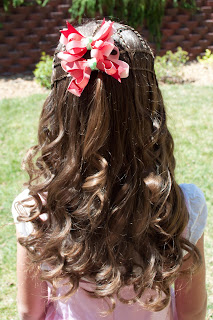 We individually curled each of the woven braids for a fuller look.  Our final step was to add some hair bows over the elastics in the back of the head.
Posted by Julie at 5:32 AM