This is another one of my favorites.  You will want to leave yourself a good 30-45 minutes for this style as well but it's worth the time! 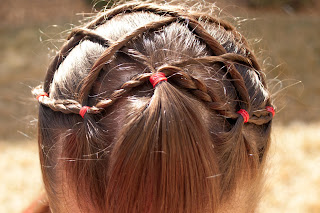 Begin by creating a small section in the front of the head, right in the middle, and secure it at the back with an elastic.  We've used some fun colored elastics to make the heart stand out a bit more.  Separate that into 3 equal sections and set the middle section aside.  Braid the outside two sections into their own braids and place a temporary clip at the bottom to hold them from unravelling. 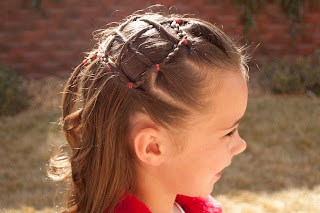 Now part out two more sections (one on each side of your original section) and make sure they don't go as far back onto the head as the first.  Combine one of the braids from the first section into the new section and secure it with an elastic.  Do this on the other side as well.  Now unplate any remaining braid that is below the new elastics.  Separate the two new ponytails in half and leave one half hanging down while you braid the other half. 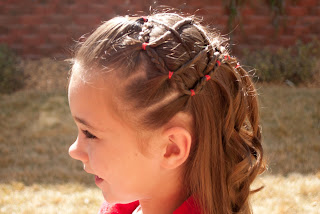 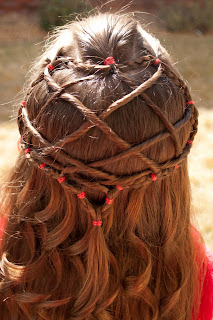 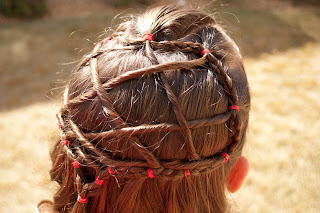 Do this with the hair from the remaining two elastics on the right side and be sure that you are adding them into the braid on the left side so that the braid is being lifted into the middle of the head.  Twist each strand of hair on the left side of the head and weave them through the right strand so that they can be added to the right braid.  It sounds so confusing to type so hopefully the pictures help out. 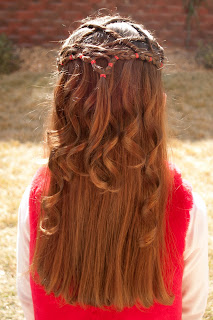 Finish your heart by adding one final elastic to the bottom to combine the two braids.  Now take the elastic out of the low ponytail so that the rest of the hair is hanging down flat. 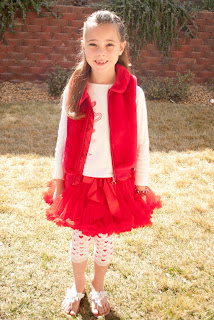 You can curl the ends like we've done here or just leave it straight.
Posted by Julie at 11:48 AM

WOW! That is gorgeous! I wish I had your talent. But with Rachel it's hard enough just to get her to sit still long enough to do a pony tail lately!

Oh, I wish my girls would let me do this one. They hate getting their hair fixed. They think it "hurts too much". Oh well, I can totally admire your work, and hope for grand-daughters that I can experiment on.

I do have to admit that it's much easier to do her hair now that she has a Leapster video game to play. :) She doesn't even notice what I'm doing because she's so involoved. (It's been awesome!)

I tried this hairstyle yesterday and for the first time it looks great =D But now ater one day when I opened it again it doesn´t look very well. Have you any idea what I can do with it now? Thank you =)

hmm, that's a tricky one. I don't know if this realyl has a "second day" option to it. You may just have to wet the hair to get rid of any braid kinks and start new with a different style.